Bedrock is the next major release of the Optimism network, planned for the first quarter of 2023 (subject to approval by Optimism governance). It will further reduce the differences between Optimism and L1 Ethereum (opens new window). Here are the major changes:

If you want to jump directly to the parts relevant to your job role, here are the parts we think will be most useful

Currently blocks are produced every two seconds. However, that value may change in the future.

Unlike the legacy network which mines a block for every incoming transaction, the Bedrock network will produce new blocks every two seconds. This introduces the following changes to the EVM:

The Bedrock upgrade also introduces the concept of system transactions. System transactions are created by the op-node, and are used to execute deposits and update the L2's view of L1. They have the following attributes:

For more information about these transactions, see the deposited transactions specification (opens new window) on GitHub.

Some Ethereum client libraries, such as Web3j, cannot parse the null signature fields described above. To work around this issue, you will need to manually filter out the system transactions before passing them to the library.

As part of the Bedrock upgrade, we have upgraded the network to support EIP-1559 (opens new window). In EIP-1559 the cost of a unit of gas is composed of two components:

There are some differences between Ethereum and Optimism in this regard:

From an application development perspective, EIP-1559 introduces the following changes:

One of the design goals of the Bedrock upgrade is to be maximally EVM equivalent. To reduce differences between Optimism's EVM and vanilla Ethereum's EVM, we have removed the L1BLOCKNUMBER opcode.

The previous version of the system used an ERC20 contract called OVM_ETH to represent ETH balances. These balances will be migrated into the Bedrock network's state as part of the migration. To preserve backwards compatibility, the methods on the OVM_ETH contract will continue to work. Note, however, that the totalSupply() method will return zero.

Unlike the legacy network, Bedrock nodes always derive blocks from L1. This means that if L1 experiences a reorg, L2 will reorganize itself to match the state of L1. Blocks that have not been submitted to L1 yet are gossipped via a peer-to-peer network, and can be reorganized if the data on L1 does not match the data gossiped over P2P.

Bedrock adopts the same vocabulary as the Beacon Chain to describe block finality. Blocks can be in one of the following states:

The current safe, unsafe, and finalized blocks can be queried via JSON-RPC.

Bedrock nodes can serve pre-Bedrock block bodies, transactions, and receipts out of the box. However, you will need to run a Legacy Geth instance to serve historical execution traces. See the Node Operator Guide for more information about how to do this.

Note that the following legacy fields have been removed from pre-Bedrock JSON-RPC transaction responses:

If your application needs these fields, query Legacy Geth instead of op-geth.

Bedrock supports all of the standard JSON-RPC methods exposed by go-ethereum. In order to reduce differences between Bedrock and vanilla Ethereum, some legacy methods have been removed. These methods and their replacements are:

To query op-node's sync status, use the optimism_syncStatus RPC method. This method will return the current safe, unsafe, and finalized as seen by the op-node.

Since the legacy network creates a block for every transaction, it processes new transactions in a first-come-first-serve manner. Bedrock, however, creates blocks on a fixed interval and therefore needs a mempool to store pending transactions until they are included in a block. To minimize MEV, Bedrock's mempool is private. To submit transactions, you will need to configure op-geth to forward transactions to the sequencer. This may change in the future.

The sequencer processes transactions in the mempool in order of their base and priority fees.

On the legacy network, funds are withdrawn as follows:

However, this introduces a security risk. If the withdrawal proof can be successfully forged, an attacker could withdraw funds from the bridge that they are not authorized to. This kind of attack has been exploited before - a fraudulent proof led to the loss of $100M on Binance Smart Chain (opens new window).

To eliminate this risk, Bedrock requires users to post their withdrawal proofs upfront. Users must wait for a valid output root to be proposed so that the withdrawal proof can be validated on-chain. Once the seven-day waiting period has expired, users can then finalize the withdrawal and claim their funds. The updated withdrawal flow is as follows: 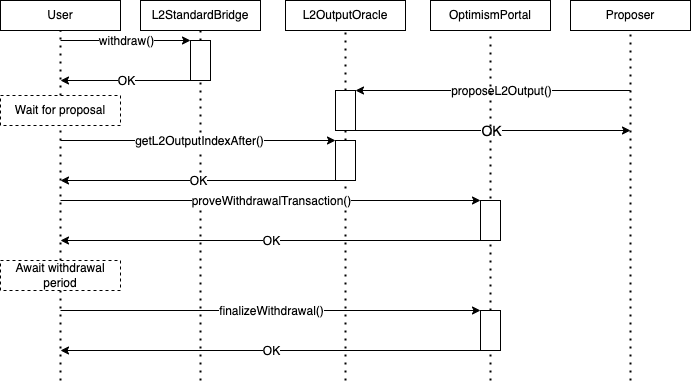 Since this change fundamentally changes the way withdrawals are handled, it is not backwards-compatible with the old network. If you are performing withdrawals outside our standard bridge interface, you will need to update your software. The easiest way to to do this is to use our TypeScript SDK (opens new window), which includes two-phase withdrawals support out of the box.

The changes described in this section are not backwards-compatible with the old network. Please read this section carefully.

On the legacy network, deposits are replayable. This is no longer the case in Bedrock. Additionally, as part of the migration, all deposits on the legacy network that have not been replayed will no longer be replayable. This means that if you have not replayed your deposit, you must do so before the migration. This affects fewer than 100 transactions of the nearly 40 million on mainnet.

The L2OutputOracle contract (opens new window) contains the state root of the Optimism blockchain. Once fault proofs are activated, it will be the one that receives the result of the fault proof process.

This is the contract that replaces the old State Commitment Chain.

The OptimismPortal contract (opens new window) provides the low-level API for communications between layers. Unless you are trying to send L2 transactions via L1 to bypass the sequencer, we strongly recommend sending messages between L1 and L2 via the L1CrossDomainMessenger and L2CrossDomainMessenger.

These contracts provide the same interface as existed pre-Bedrock so dapps don’t have to be modified to run on Bedrock.

Currently the L1 information is delayed by ten block confirmations (~2.5 minutes) to minimize the impact of reorgs. This value may be reduced in the future.

The SequencerFeeVault contract (opens new window) handles funding the sequencer on L1 using the ETH base fee on L2.

The fees are calculated using EIP 1559 (opens new window), the same mechanism that Ethereum uses (but with different parameter values).

These contracts provide the same interface as existed pre-Bedrock so dapps don’t have to be modified to run on Bedrock.

These are contracts that are no longer relevant, but are kept as part of the state in case there is a call in any dapp that uses them.

# Deposits (from Ethereum to Optimism)

We recommend adding a 50% buffer to whatever is returned by estimateGas to ensure that your deposit will not run out of gas (Note: the Optimism SDK already does this under the hood). For example, if you wish to send a deposit of ETH, you might call eth_estimateGas and see that the deposit is expected to consume 100,000 gas. You should then multiply that estimated about by 1.5 and then send your transaction with a gasLimit of at least 150,000 gas.

In order to prevent the Optimism network from being DOSed via forced L1 to L2 transactions that bypass the Sequencer, a fee adjustment schedule to all L1→L2 transactions that closely mimics EIP1559 is included with Bedrock. Like in the current network, deposit fees are paid by burning some amount of L1 gas proportional to your deposit's L2 gas limit. Unfortunately, this means that you may have cases where you estimate how much gas an L1→L2 deposit will cost, and deposit fees increase by the time your transaction gets included in a block and executed, causing your deposit to run out of gas and revert. This is why we recommend adding a 50% buffer to your gasLimit to ensure your deposit will not run out of gas.

Deposits that come from contracts still use address aliasing.

Deposits will also be faster, probably about 2.5 minutes or less, rather than the 10-20 minutes they take now.

This section discusses some of the changes in Optimism internals.

There is no longer a CTC (cannonical transaction chain) contract. Instead, L2 blocks are saved to the Ethereum blockchain using a non-contract address to minimize the L1 gas expenses. Please see the Public Testnets page for more information on where to find batch submission addresses.